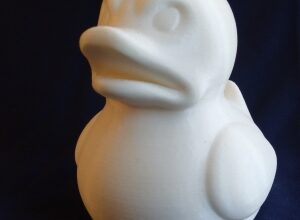 List of M- and G commands as used by the CraftBot and expert specs.

This post will be updated as knowledge progresses… If you find some more info about the effect of M/Gcodes, please post it here, so I can update this list.

About the transistors steering the fans: the special marking code was FFt the type number is BCV27 , that is the usual name , you could also use FGt , which means it is a BCV47 ( able to work at a higher voltage ).  So , if you search use the name BCV27 or BCV47

Replacement possible with plastic bearings: Drylin RJ4JP-01-08. Smooth rods needed to be replaced too as the original ones are slightly to thick.

Belt pitch BELT GT2: 2mm. The belt lengths are 132cm and 128cm.
Pulley 20 teeth x2mm= 40mm per rotation = 3200/40=80 steps per mm for XY movement EDIT: apparently I missed something when trying it with another electronics, or CoreXY needs double steps: it turned out it needs 160 steps per mm

The Firmware will report an error -and stops printing- when there is a character as “(” or “)” is encountered when executing Gcode.
Simultaneous axis movement depends on the GCODE. For example if you send G1 X100 Y80 Z50 E10 in one line, this means that CraftBot will execute 4 movements at the same time with interpolation, thus all the movements will be started and finished at the same time. Slicers most often separate these commands by new line characters, for that reason they are not executed at the same time.
The left-front bed corner seems to be at X8 Y0, in stead of X0 Y0. Abjects are 8mm shifted because of that. Adjust in the slicer -if possible- to be able to print at the complete print area.

A wait command: P=millisecond, S=second, So G4 S4 is a 4 second wait

G20: Set units to inches. for the no-standard countries ;-

G21: Set units to millimeters. for the rest of the world…

The normal setting: the X0 Y0 Z0 is at the left-front corner with the CraftBot, the build plate at the highest point: all XYZ points are absolute to the X0,Y0,Z0 point

G91: Set to relative positioning. All the following XYZ commands are relative to the last point

Most used is the G92 E0 command, to reset the Extrusion value each layer, to avoid very high E-values at the end of the print when not done so

G198 moves the head back to the original location after pausing. The extrusion value keeps untouched.

G199 pauses the print immediately, and moves the head to X0, Y100. (this is the command the LCD screen uses)

M18: Disable stepper motors. The motors turned off and more or less able to moved by hand

M84: Switch off Motors. The S parameter should turn the motors off after a period of time, but ignores it for now.

Set the extruder temp and wait for that temp to be reached before executing following commands
It looks like, it stops waiting if the temperature is within a 3 percent range of the set temperature, in Celsius. Eg. it is += 6 C at 180 C, but += 8 C at 240 C.

M110: Set current line number. ???? The number of the line of the list of Gcode commands

???? eport the X, Y, Z and E coordinates in steps not mm to the host that it found when it last hit the zero stops for those axes.
No terminal feedback

M140: Set bed temperature: The parameter S sets the temperature. Same as M104, but for the bed. No waiting excecuting the folowing comands while heating.

This command is not waiting thus it attempts to play the sound at once, but since there is an ongoing sound (first line) not other M300 commands are interpreted. Try to use this with the G4 command. M300 followed by a G4 and repeat.

For the old steppermotors, also with new firmware, they use this kind of code:

For the new silent drivers in the CB+

So for more current for the AB motors you can set:

To spin the extruder fan fast (as liked by my E3d metal hotend) I added this line to the startGcode:

gets the duty cycles of the heaters and the fans. For example you can monitor the working of the PID or the temperature dependence of the head fan.

gives back the CURRENT machine coordinates in STEPS, where the head is RIGHT NOW.

gives back the coordinates last entered into the queue of movements, that is the last GCODE line processed, but not necessarily executed yet.

???? The values specified set the software limits for axis travel in the positive direction.?
no feedback in terminal

M1205 E415 ; set 415 extruder esteps for 1mm RAW processing … this will not persist after power toggle, so put it in your slicers start-g-code or something.

Extra parameter, F, meaning “Fan Correction”
Terminal feedback: ok S:255 H:255 L:50
An expert feature IMO. The PID controller algorithm involves three separate constant parameters, and is accordingly sometimes called three-term control: the proportional, the integral and derivative values, denotedP, I, and D. Simply put, these values can be interpreted in terms of time: P depends on the present-error, I on the accumulation of past errors, and D is a prediction of future errors, based on current rate of change What is the W value?

M4001 will display the current value of the Heated Bed (probably it is 80 now.)

M4002 P1: this will let the bed heating element to get as many current as it requires to heat up fast.

M5000 XY Z
example: (these are the default factory settings)

Mechanical parameter settings: (Necessary if somebody make changes the mechanics of the printer. The ratio is counted by these parameters.)

M8004: code to diagnostic overcurrent error occured or not on HMI, Predator or on FFC cable. It is working only with v3.1t Pr3dator board.

M6666 S69 does the reset. It really resets the main board, but no feedback to the LCD panel, so it won’t show you the changes. For example if you heat up using the LCD and you issue this command the LCD still shows its heating up, but that is not true.

M6666 reset without parameters, but you won’t see too much using this.

Power Break and continue feature (only for CB+ and firmware 8886 and above):

Information I got from power coder Psanyi  about the power break and continue feature:

CTRL+right mouse click and move is a look around function.